Calling all AutoCAD and Civil3D power users @Speckle_Insider! A new connector MVP is in the works

and we’re looking for input and suggestions re:

Re: C3D
Featurelines → Polycurves would be the no1 thing to tackle for infrastructure

This would enable streaming between C3D highway design and structural design in Revit, Tekla etc.

Featurelines → Polycurves would be the no1 thing to tackle for infrastructure

This will be first on the list for C3D conversion testing, thanks for the tip!

Thanks for sharing. Great to see these connectors being developed

I was charmed by the feature you are developing for the Rhino connector to upgrade Rhino geometry to specific Speckle types using Rhino user attributes and/or layer names.

However, I can see some limitations using this method:

To some extent, I think this functionality can be added to the client UI in a specific selection & mapping form for layer based CAD software as follows (powerpoint extravaganza incoming): 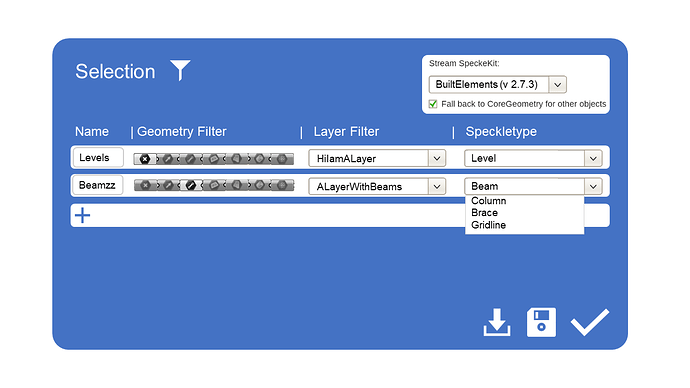 The core principle is that this loads the available Speckletype objects and the geometry filter dynamically informs the speckletype dropdown list (i.e. showing what you can convert a line to). In addition:

As I am looking at the image, I do realize that it has a limitation to not subgroup within a layer (i.e. select beams and colums from the structure layer). But this could be managed in the native document.

I wrote this from a user POV, so apologies if this is impossible to develop!

I hope it’s a bit clear.

@Guus All great points, and wow

As you’ve identified, the core challenge is scoping out the most useful filtering method based on sort hierarchies & geometry type. This would inevitably influence file organization & user workflows for each non-visual programming application: easy for apps that primarily use Layers to sort, but needs

For now, schema conversion for AutoCAD could be implemented via command to set object XData, similar to Rhino (

And schema properties would be checked on conversion before sending the stream:

Great feedback, the schema builder feature might need a whole other thread to itself!

@gleeuwdrent: interesting to have a look at this.

Featurelines as mentioned earlier, Alignments is a must. I see it in the same category as Featureline

I think it’s interesting to bring pipe networks/pressure pipe networks data to Speckle. Especially if you work with with non-precast structures. Extend exchange to hydraulic calculations, Structural detailing of a Manhole to Revit and structural calculations to calculations software.

Also what can C3D retrieve back from other programs, then I think elements from other software to blocks. Example piles to blocks or v.v. Linear elements like railing to a 3D polyline or solids export.

Would there be some way to manage shared coordinates through Speckle? Revit has lots of trouble with this when encountering many different (legitimate) things surveyors do in AutoCAD or Civil3D files.

I would see this being implemented as a transformation that is performed on geometry as it’s streamed to one platform or another. So each stream would have to store a transformation relative to a known point that is coordinated between each of the files. This is probably a lot of thinking for a pretty narrow use case, but for architects at least this is a big unsolved problem.

Would there be some way to manage shared coordinates through Speckle? Revit has lots of trouble with this when encountering many different (legitimate) things surveyors do in AutoCAD or Civil3D files.

This is definitely a common pain point, glad you brought it up Nick! Pinning this as an issue when we move towards developing project management features after the beta. We could potentially store an origin point on a project / team level so that the correct transformation matrix can be automatically applied to all child streams

Quick intermission to say that, currently, transformations relative to Revit’s Base point are applied when receiving and sending. Not sure how AutoCAD deals with it, but we should definitely align

A post was split to a new topic: AutoCAD connector fatal error

Adding Solids with propertysets to connector functionality is urgent as well.
When you want to communicate on other software, e.g. Revit or Rhino, but also navisworks solids are the main medium for communication.

Why to the revit project basepoint and not the Internal Origin?

With that justification, we’ll see if we can bump solids up and support them sooner! Will keep you updated on this thread

Hi @Dickels112 , we’re applying transformations relative to the Revit project basepoint as we’ve found that would produce the most predictable results when collaborating with other software sice that’s what is used by surveyors etc.
I do see use cases where the internal origin could be preferable, but hopefully they are limited!

Did we get this wrong, or is this a deal breaker for you?

At some point we could have a setting letting people decide which one to use, but for now we’d like to keep things simple…

With regards to survey: this is what the survey point is actually meant for, but no-one is using it in that way.

I suspect that the best solution to the c3d/revit basepoint issue is to by default use the internal origin, while including the base point and survey point in project information. These variables could be stored in a stream’s globals branch, and included as a toggle option for receive operations to handle geometry transformations - that way we aren’t biasing towards users who care about the base point vs users who care about the survey or internal origin.

Implementation of this could be difficult at the moment, but I’m curious to hear what others think

Hi @clrkng, we are starting to look at this as well. I agree that we should separate consideration of 1. what data we send and 2. what transformations the connectors apply by default.

Given that the base point and survey point may change as a project is developed (it shouldn’t but, let be realistic

), it may be better to tag them on the base commit object rather than the stream globals.