While I tend to prefer baking in the boolean operations we might perform in Rhino when I’m form modelling, say, replicating those steps across applications should be possible with a theoretical Base extension object of CSGSolid with a tree of operands and Solids. Rather like embedding the GH graph of boolean operations into an object type

Obviously, this would imply composition work in Applications that don’t natively support this representation, but in puristic terms, the Speckle paradigm could support this as a first-class Geometry type. 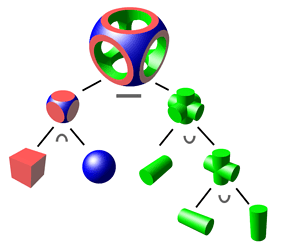 In this archetypal diagram, each Base object could be structured and decoupled:

Without working through Psuedo# I’ve not gone into how terrible an implementation either is better. I like tree implied by the first, but if the transport of the second or even a simple array made sense then also gravy (e.g. [Base, Base, “union”, Base, Base, “intersection”]. The only caveat to this proposal is that the intermediary (component) objects don’t make a great deal of sense as visualised objects outside the context of the composite CSGSolid.

It just so happens that IFC, GeometryGym, Solidworks, FME, threejs & babylonjs do support it.

Solid isn’t directly a Speckle Geometry type to begin with, but that’s a different question

Nevertheless, there isn’t really a restriction on there being one. It’s a tree of operations on anything valid really.

By extension a proposal for DonutSurfaces is implied

This is quite interesting - i’d love to do a quick hack in threejs, and create this structure semi-programatically in gh. I’m mulling over it

Wondering as well if it would make sense to add some 3d primitives as well that are widely supported - sphere, plane, cylinder, etc. - though this sounds like a rabbit hole.

Would this be something other solid modellers support and like? I’m thinking catia, solidworks, etc. (never used them myself)

It is indeed a solid modeller paradigm. Even AutoCAD3D supported it once upon a time.