I’m currently testing streaming some basic objects from GH to Revit to get familiar with the new classes. One very cool thing of Speckle 2 is that updating is now done very well, good job

! However, I came across two minor issues when changing my GH model and trying to receive the updated stream in Revit.

The images above are from earlier versions of the connectors, but I have just updated everything to the latest version which unfortunately didn’t solve these issues

Thanks a lot for the detailed bug report, this is super useful for us!
I’ll track it internally and we’ll investigate as soon as we can

I can confirm they’ve been now fixed and will be included in the next release (due in 1-2 weeks).

Thanks again for reporting these!

Hello,
this post seemed a good place for something I noticed/wanted to ask, as it is similar topic. I have been importing from GH to Revit some columns with consoles. As I use the same family type for different places, and just have them facing in different ways in Revit, I decided to spare myself figuring out every time what rotation I need to put in GH. Instead, I import them, and then was doing the axis rotation in Revit. After doing a rotation, I wanted to update with some new elements added, not affecting the rotated columns. However, after importing a next stream in Revit, it duplicated the already existing columns.

So here is my question/observation: Is it correct to assume that once an update has been done in Revit, it no longer treats the element as the same and a new stream will just create a new element in the same place instead of updating it? Is there some workaround for this?

Example 1: I pass Column X. Then in Revit I rotate Column X about its axis. Then I update something in the Grasshopper/Rhino and pass again Column X (the column has not been updated in the Rhino/GH). Once in Revit ,in the location of Column X now I have 2 Columns - the rotated and the one passed after the stream was updated.

Example 2: If I repeat the above, but without doing axis rotation of the column, it recognizes it as being the same and does not duplicate.

I think the update problem is instead related more to this other topic: Update behavior Rhino to Revit

Where the core issue has to do with the IDs we are generating for grasshopper not being very reliable.
I would suggest setting your own IDs on the column, in a similar way to this: 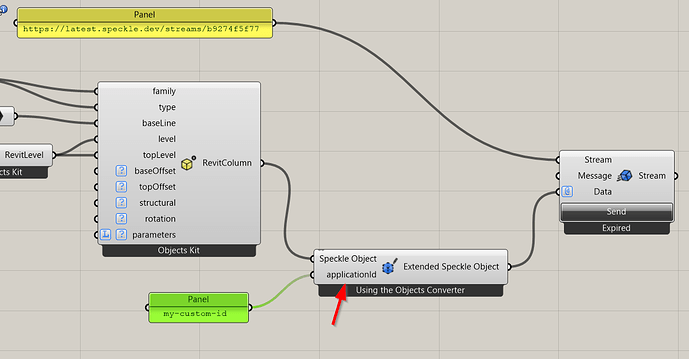 I tried the proposed method by you. First I tried with some short applicaitonID and then with a 32 character long one, to match the length of the UUIDs. Unfortunately, in both case the columns get duplicated again, if I have modified their rotation in Revit prior to update via speckle