Thanks @teocomi for you reply!

Here I created a stream with some buildings of my town downloaded from OSM.

Somehow I’ve managed to mess the features attributes, but it can be a good example of the use case: being able to make edits to the attributes in excel and send it back to QGIS.

Unfortunately the data chunks and __closure fields don’t play well with this kind of task!

For the Civil 3D → QGIS part, if I understood the current code correctly, the qgis plugin only looks for Layer objects (and its children) from the stream, so it only works with its own data (and indeed I was able to copy the polygons to an empty qgis project).

For my specific use case, I don’t care much if the received alignment(s) will be placed in a new or existing layer, but I can imagine some cases where, e.g., CAD layers need to be transposed to qgis layers - if they have only a single geometry type!

I am trying to install the speckle plugin for QGIS.
Running into the same issue than @tlmn
I did pip install specklepy. Is it because my version of QGIS is too recent ? Currently installing 3.16.13 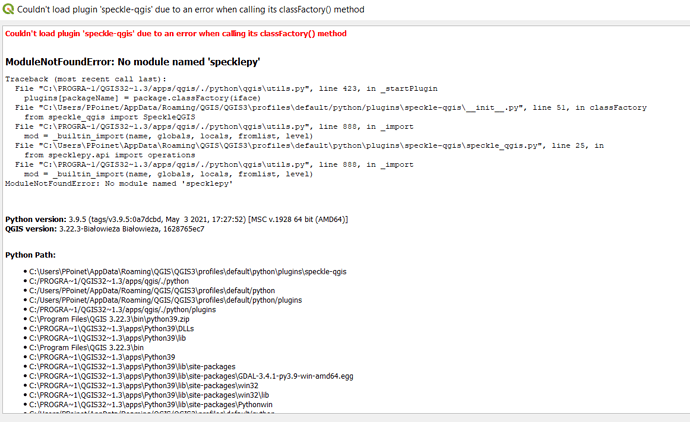 Are you trying to install the connector via the package manager from QGIS? or directly from code?

Not sure about the QGIS version, I use 3.22 but I’m aware Kateryna does use 3.16 so in theory it should be fine with both.

EDIT: Also, what system are you running QGIS from?

thanks @AlanRynne for the instant reply. I tried to install from QGIS’ package manager. Will try from the github repo then, hopefully the dependency installer with solve this.

what system are you running QGIS from?

If you mean Mac or Windows, I am using Windows

I’ll try to debug on your specific version of QGIS to check if it has anything to do with that.

The latest version in the QGIS package manager should have the dependency installer… so I’m leaning towards considering this an unknown bug for now. Thanks for bringing it up.

On a sidenote, just to try to pinpoint the issue a bit more. In windows there are several ways to install QGIS afaik, I know of:

Which one did you use? This will help me reproduce your steps and hopefully get the same issue

Thank you for investigating further. I installed QGIS from this Standalone

Hi @sanzoghenzo ! Sorry for a long time to respond. We are working on a new release right now which would allow receiving data from other software than only GIS. Would you mind sharing a sample of the data you sent from Civil3d, here or in PM? If you can make me a stream collaborator for existing or a new test stream would be great!

Hello, I’ve reinstalled QGIS and and still getting the same error as posted above. Any new tips for bypassing this ?

Could you try installing specklepy directly from your QGIS python environment? Just to ensure it is, in fact, being installed.

I cannot manage to reproduce your issue with your exact version, so I’ll need to look into it a bit.

Quick question, once QGIS opens (and after that exception), do you have a “Speckle” message panel in QGIS? And if so, does it show the message?

If it doesn’t, it may be that the “auto-installer” we included is not doing the trick for you for some reason. I’m going to look into this further, but i’d be happy to schedule a call to look into your particular case as I’m sure you’re not the only one affected by it, just the only one that brought it up

And sorry for the late reply on this! It fell through the cracks of Discourse

Hi Alan,
Many thanks for the answer.
I finally successfully installed the plugin after pip install in the command prompt. I thought I tried last time but didn’t work back then. So yeah, not sure why but in my case Speckle hasn’t installed it automatically.
All good!

Quick question, once QGIS opens (and after that exception), do you have a “Speckle” message panel in QGIS? And if so, does it show the message?

Sorry, couldn’t replicate this one after the plug-in got installed

Glad to know that a manual install fixed the issue!

Not sure how it can get to that point without installing specklepy. I guess there’s some hole in our logic we need to patch!

One quick advice, i think the latest QGIS version hasn’t yet been updated to the latest specklepy version, so make sure you install the one it’s expecting: 2.6.4.

If you just did pip install specklepy you may have gotten the latest 2.7.4 which I’m not sure but it may have breaking changes.

We’ll update it for our latest release, but if you want to keep up with the latest updates, cloning our repo into your plugins folder is a good way to go

I actually tried to send data into speckle.
This is a shp file from SNCF open data available here 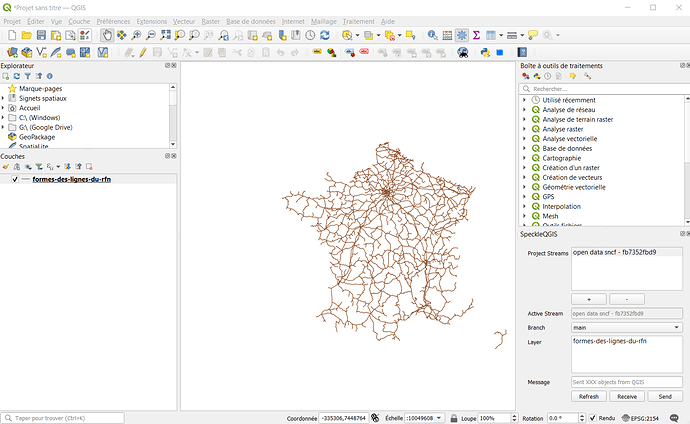 I created a stream via the browser, selected it, sent it. but it says “no displayable objects found in object xxxx” 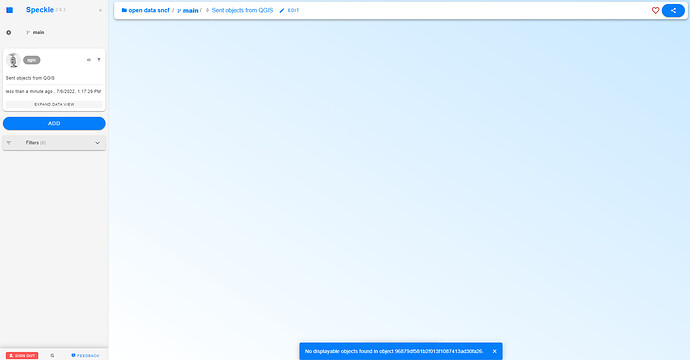 The data view doesn’t show anything 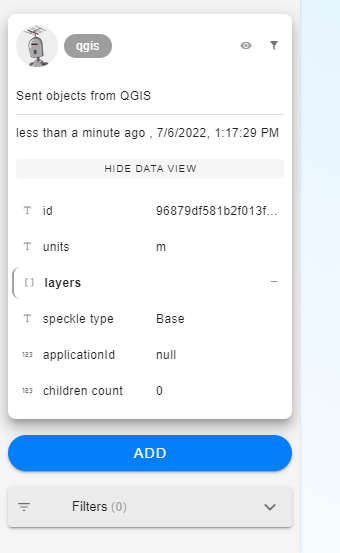 Hmmm… silly question, but could it be that you didn’t select any layer to send on the SpeckleQGIS panel?

PS: we desperately need to upgrade the UI, it’s on our todo’s already

but could it be that you didn’t select any layer to send on the SpeckleQGIS panel?

I guess I did

It will allow you to press send without a layer selected. The layers list shows the available layers. It isn’t clear but you do need to select them in the list. 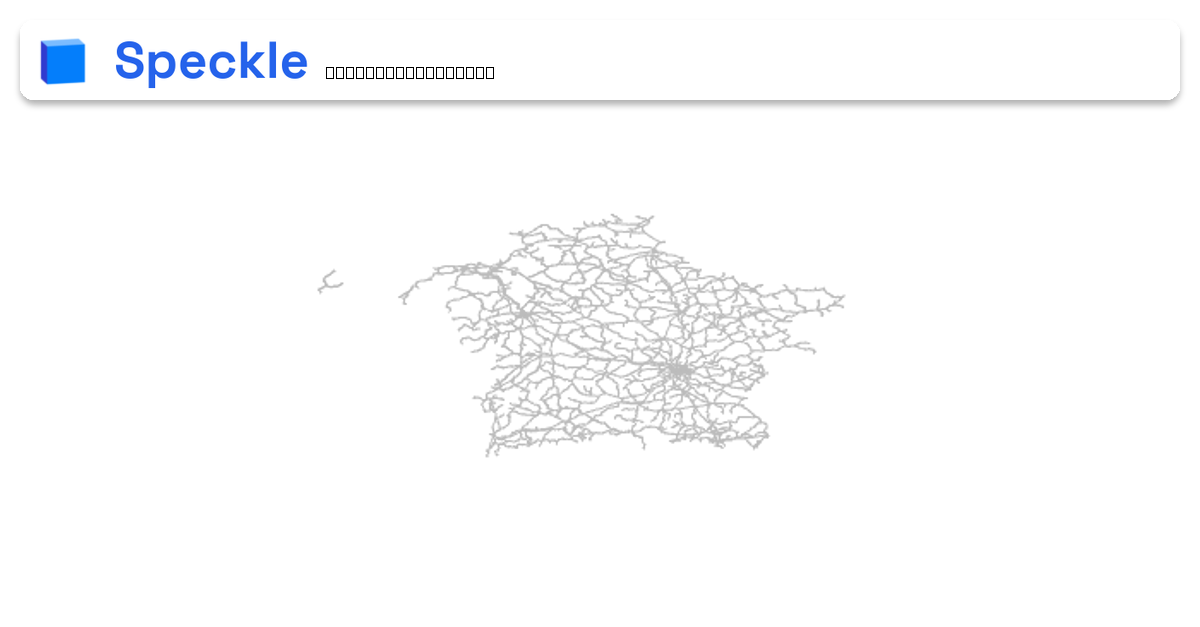 @jsdbroughton beat me to it! 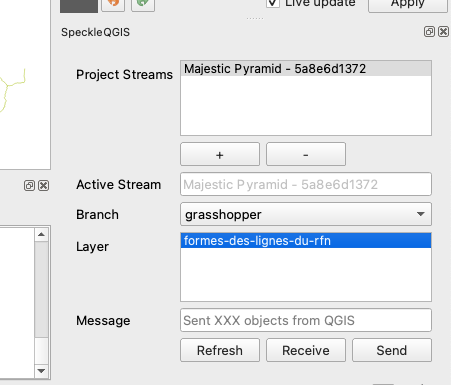 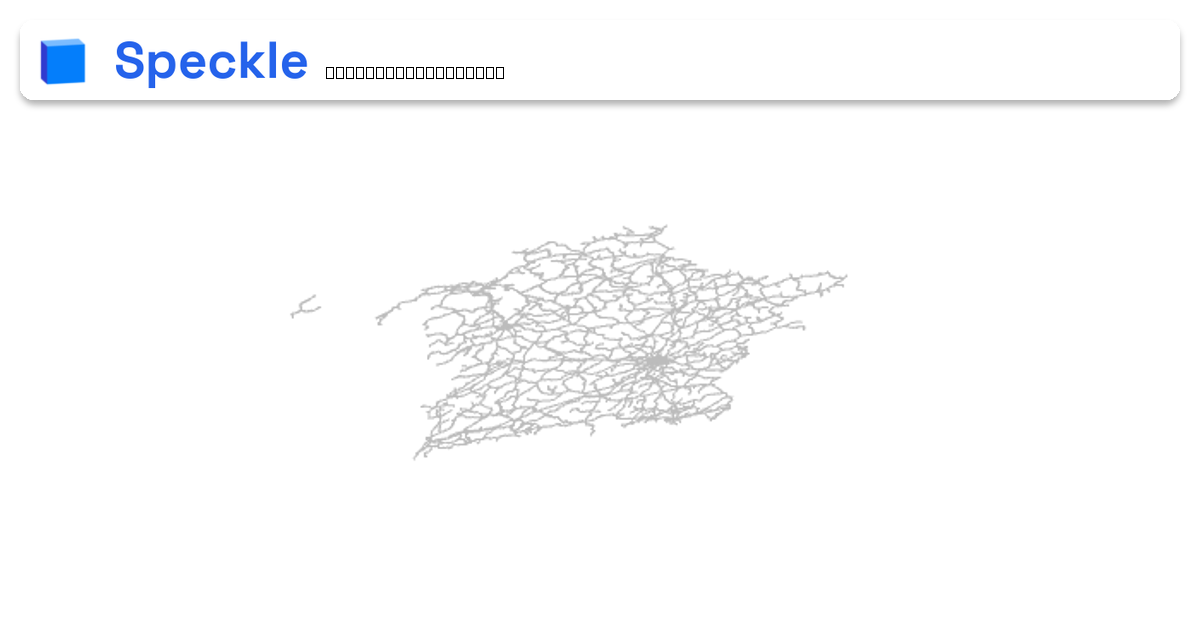 aha! wohooo
thank you both!

A post was split to a new topic: Rhino crash when receiving QGIS Raster layers

New version has been released few hours ago! Many issues raised here are now fixed and CAD integration simplified:)