Hi all, sorry if this is a ridiculous question, but basically I have no download or update button in my Speckle manager and manually downloading connectors doesn’t seem to work (they did not show up in the manager). 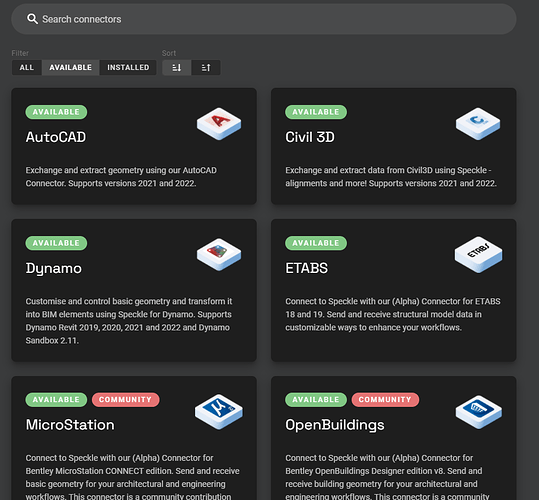 I installed Speckle a while ago intending to test it on a few projects, but got too caught up to really look into it. I have some time now so I decided to check it out again. I was prompted to update the manager, which I did. Once it updated I saw that the Blender connector had an update so I hit the update all button, but all that appeared was this “close” button: 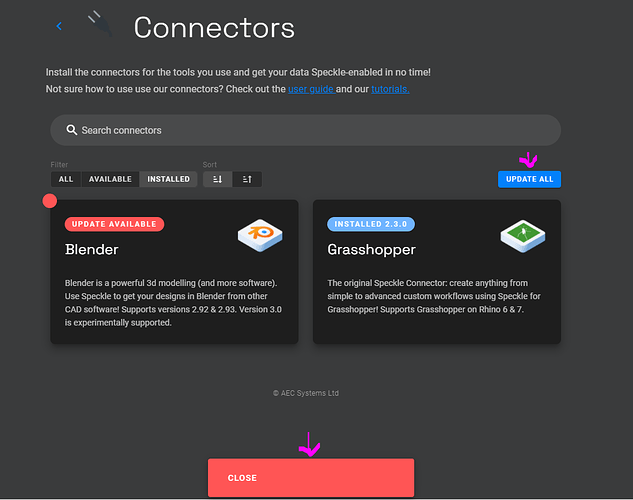 And as I said earlier, when I went to the available connectors tab, I can’t see any way to download them, and after manually downloading and installing some, I restarted the manager but they still aren’t appearing. Blender also still shows up as having an update available, which I guess means it didn’t manage to download and install the update. Any ideas? Thanks in advance!

Hey @claire_lee ,
Thanks for reporting!

Can you please give it a go?

Hi @Testers and anyone else interested! We’ve been working on a brand new version of Manager that should (

hopefully) resolve several issues that some of you were experiencing when installing new connectors. It’s been rewritten from scratch and we’re currently releasing it as a preview to gather early feedback (and bugs of course)! So grab it while it’s hot and give it a spin, it can perfectly co-exist with the “old manager”.

PS it’s still an early preview release but it should have all the basic functions!

Hi @teocomi I also want to add that i can never automatically update the connectors. I get this error “Unknown error: Error: spawn EBUSY”
I can only manually update. At least for Blender, Archicad and Grasshopper.

Sweet, I’ll take a look. Thank you for the prompt reply!

Hi @Constantinesis , any luck with the new Manager?

@teocomi It asks me to Install .NET6
Will it work fine with Archicad connector ? I know that one required exactly .5 version.

Yes, .NET runtimes are always compatible with previous ones

I installed the Manager 2.0. It does show an update for Archicad. I clicked the update, something has been installed but it doesnt show up as updated. The Update button is still there and in Archicad, i still have the older version 2.6.3.
Maybe i should restart the PC?

Another thing is that I still seem to have the Manager 2.2.6 installed

Hey @Constantinesis , that was indeed a small bug, can you close the new manager and launch it again?
It should update to 2.3.1, and the update should work as expected.

Also, sorry for the confusion, I’ve set the version numbering of the “new manager” to start from 2.3.x so it’s more clear that it’s newer