Basic Question - potential of Speckle in regards of Exchange

As far as I understand Speckle Connectors transfer proprietary App Data
into the Cloud in their own File Format,
to allow to offer all kind of Magic like a 3D Project Viewer and Structure Viewer,
Version Control and all such things, for Communication.

But what is exactly the current or future potential of a two-way lossless Exchange
for real Collaboration between users using different App of choice ?

As an example I watched the Rhino to Blender Video.
When it was said - now you have the Model in Blender, which has far more richer
Material quality than Rhino and extended the Render Materials …
(Can’t test so far, as from all my Apps, so far only Blender is supported by a Connector)

But what will happen if the Blender user does some Geometry extensions,
a new Material setup, … and streams it back to the Rhino user.
Will Rhino get the Blender Cameras as Saved Views or such in (?)

When Rhino changes some Material assignments to Objects, of Materials
were edited in Blender before, or Rhino user had already created other new
geometry and streams it back up,
will Blender get in the new Material Assignments from Rhino without
losing the Material Settings/Updates done in Blender (?)

And the typical Synchronisation issues … like Blender moves a certain Wall
to the right while Rhino at the same time moves the same Wall to the left.
What will happen if they exchange the next time.
Will Rhino win because its Wall change time stamp was 3 nano seconds
later (?)

To not be misunderstood,
in a case where collaboration isn’t correlated,
like from CAD or BIM, mostly geometry, data and information → to a Visualization
App like Unreal, Twinmotion or (pure) Blender,
I think a one-way only synchronization is totally fine !

When it is lossless, e.g. Rhino modeling a new Concrete Wall, when streamed
into Blender, should not import again that old previous Rhino Concrete Material,
as it was already updated and refined in Blender for the older Concrete Walls
and such things.

But for CAD BIM Apps collaboration with me Vectorworks or Bricscad BIM,
together with friends who are on Archicad, Allplan maybe even Autocad or Revit.
How would that end up ?

Of course we should communicate who does what before editing …
you do the Columns I do the Walls, or you work in 2nd Floor only,
don’t ever touch my entrance floor …
But if things happen - what will happen ?

AFAIK there is no check-out-and-lock-for-others mechanism (?)
Will this be part of Versioning and/or Branching instead ?
(I am no programmer who is used to such workflows, will a normal
architectural Mac User or CAD artist be able to keep control over this ?

There is quite a lot there to answer in one go. So to break it down to a few parts.

Take a look at our view on sharing as a form of communication: 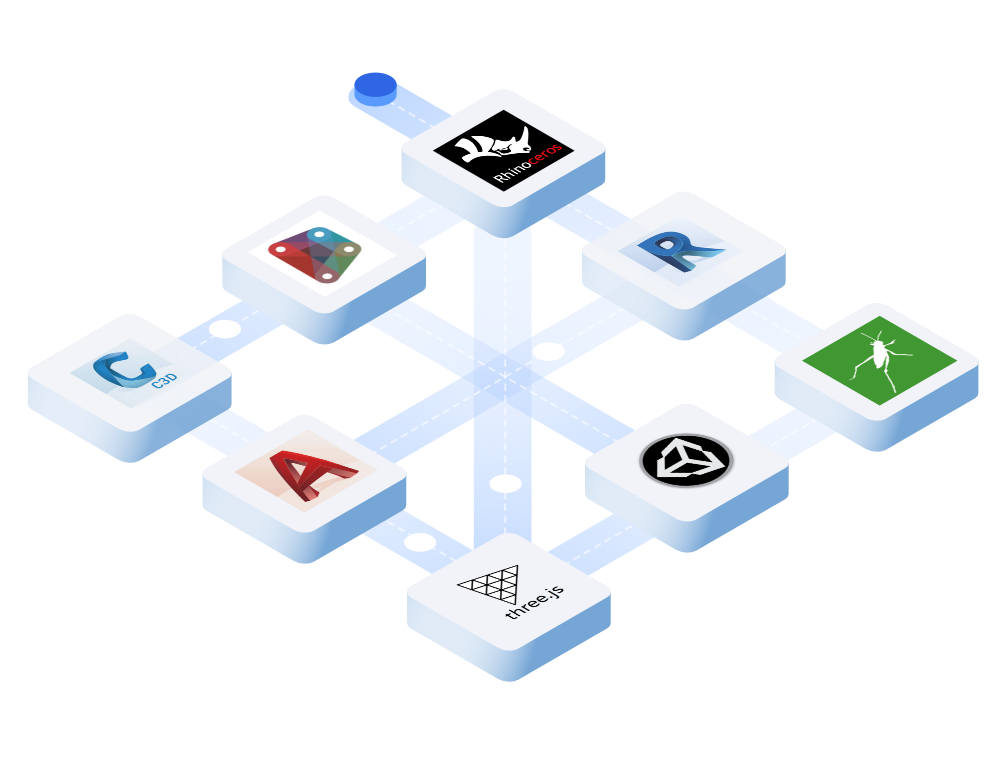 Extract and exchange data in real time between the most popular AEC applications using our tailored connectors.

Like any conversation there will be etiquette and works best when there is a common understanding between all parties. Speckle is not intended to be the arbitrator conflicts. As all commits are versioned, while the latest will be the last to submit, all prior commits are available.

Likewise, a Wall sent from Blender using Speckle is not a “Blenderwall” in Rhino but a “Rhinowall”. This is the implication you hint at. Instead, Speckle holds a concept of “Wall” that can translate into each software. It keeps all the properties that associate to the wall that can be used to keep material mappings, or bills of quantities etc. and it keeps instructions on how the geometry of the wall can be represented.

With specific respect to blender materials and playing with rhino and handling changes take a read of this tutorial: 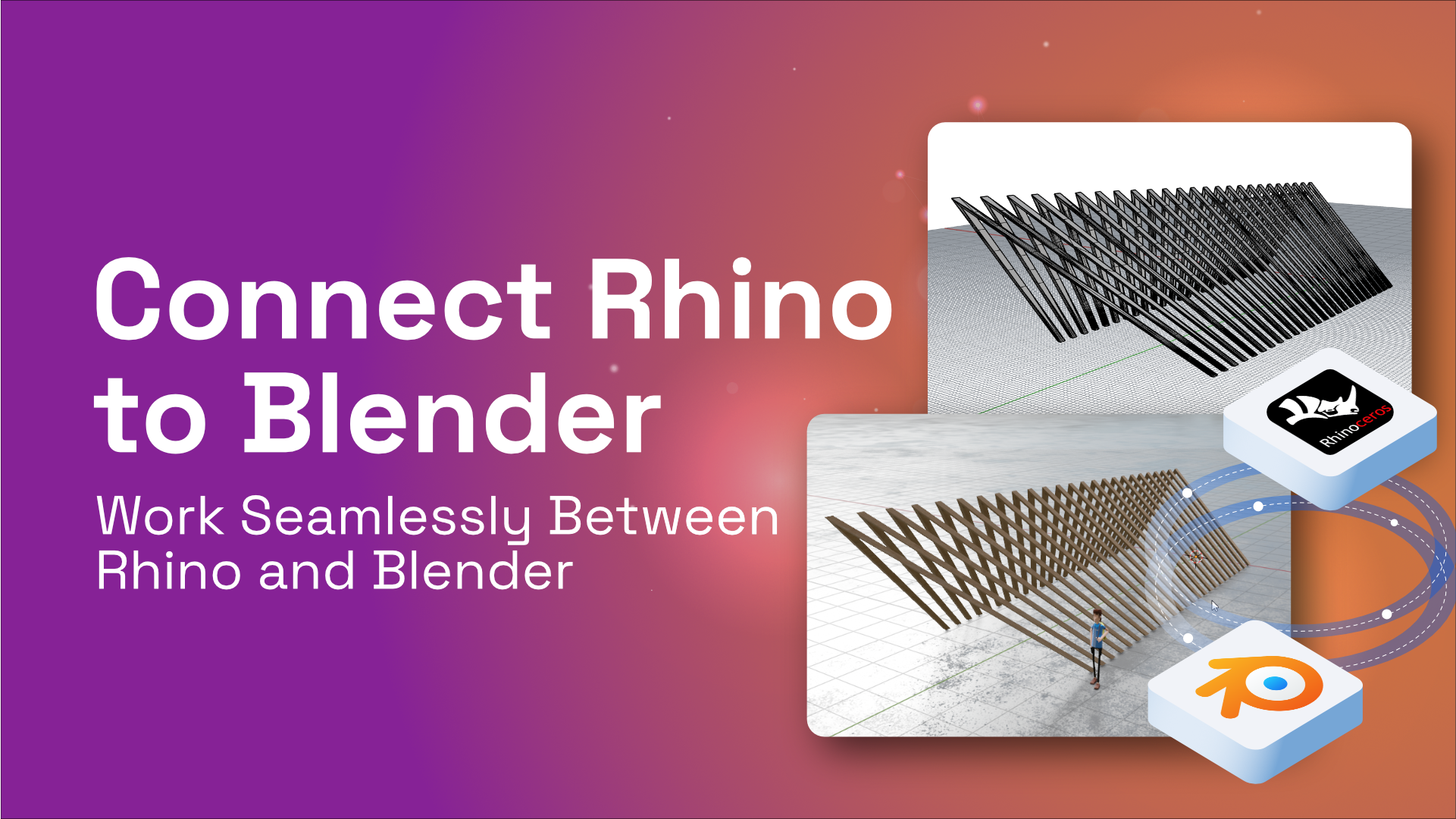 Blender and Rhino are both very powerful programs but each are suited for different tasks. In this tutorial, we’ll cover working seamlessly between Rhino and Blender using Speckle.

And now take it for a spin. If you have the blender connector installed start to send and receive and experiment with additional features as you go.

Watched the Blender/Rhino video again
In general it looks like I had not really a right conception of how Speckle works.
But I think I have enough overview now to start testing.

Installation, what happens online, maybe a Blender to Blender collaboration …

Keep in touch as you explore.

Could it be that Speckle Manager isn’t exactly macOS 13 Ventura
(latest Public Beta from this morning (Ventura release this Monday ?))
and Apple ARM M1 Macs compatible ?

At least Manager’s half life time is pretty limited for its Window on screen
and the Icon in my Menu Bar for me … about 10 seconds when in idle,
closes even faster when I try to click and navigate inside the Manager.

At the beginning I found some rests of its tasks in Activity Monitor,
now all Manager Threads get shut down immediately after Manager
disappears from Screen.
A Mac Restart did not help either.

Also I activated Beta Updates for Manager.
But it looks there is no newer version than which I downloaded.

We are prioritising our resources in supporting stable releases and not actively supporting beta versions of operating systems.

Do you have access to a machine with the current stable MacOS?

I’ll note the feedback, but it is as likely that Apple broke something/ will fix something before we are able to address it.

I’m unaware of what Blender’s policy is for that either.

I could try my old Trash Can via Screen Sharing … macOS 12 latest …
But I will also try on Windows.

I am pretty sure that this was the latest Beta, AFAIK Ventura will be
officially released October 24th.

For whatever reason, a few hours later, for now, my Manager stays
in top menu bar and does not crash after 10-20 seconds …

I do understand the priority …
Apple users are a minority and currently Apple ARM users still even more.
No problem with such priorities …

There are only installers for Mac and Windows.
Is there no Linux support at all (?) or does it work on Linux
with out Speckle Manager ?

OK, I think I need to wait a little longer for testing Speckle.

My only supported App so far is Blender.
If I get that right there are only Connectors in Beta state for up toBlender 2.9.
I am not able to install Blender Connector on Mac or Windows …

This is not meant for as any critique or demotivation.
I just say what the current situation for me is.
Hope for Bricscad support after their October 31 V23 release.

Will test uploading IFCs for now.

EDIT:
I think I managed to “install” Blender Connectors manually …
at least on Windows …

Does not work on Mac though.
Blender Connector for Mac says Installation successful.

But seems the 2.9 Fake Settings Folder trick will not work on Mac,
there are no traces of anything Speckle Connector File to find on
the whole Mac Drive …
Neither on M1 Mac, nor on Intel Mac with macOS 12.

Sorry, just a few notices of my experiences for now.

Thanks for using Speckle and reporting issues you had! It really helps.

Yep, our IFC import is quite experimental😅. So there will be indeed quite a few surprises. We want to fix it but resources🤷‍♂️.

I managed to install Speckle Connector for Blender 3.4!? only
after extracting Folders from ./config/Speckle …

So yeah, you can install Blender connector by manually copy-pasting it into 3.4’s scripts folder.
PS This works for Windows. I’m not a Mac user

Blender 3.3 support is in our to-do list. But in the meantime, as you discovered yourself, you can manually copy-paste it from scripts folder (for windows only).

Does not work on Mac though.

I am not a Mac user so I have no idea how that works. Sorry.

Hope for Bricscad support after their October 31 V23 release.

My Speckle Manager seems to be now stable on Mac and it even loaded
a Beta update recently.

Yep, our IFC import is quite experimental😅. So there will be indeed quite a few surprises. We want to fix it but resources🤷‍♂️.

Yes IFC is a bit strange. I tried a not so big recent IFC 2x3 but that failed,
maybe because of the 5 minute limit. So I tried a really old IFC from 2010.
That streamed up finally.
I was not able to control Visibilities on Speckle Server, like I can with your
demo files on site. And as said geometry was a bit strange.

AFAIK you use a IFC.js (?) or similar library
(was on their site or forum and they told that they aren’t that far)
while BlenderBIM uses IFCOpenShell. Maybe that is a bit more
advanced already (?)

So yeah, you can install Blender connector by manually copy-pasting it into 3.4’s scripts folder.
PS This works for Windows. I’m not a Mac user

Yes, it works basically the same on Mac.
But the problem on Mac is how to get these Speckle and Modules Folders
for Blenders AddOn path …

When I install the Connector from Manager on Mac,
it loads something, it works something until it brings a success message as
it does on Windows. At least into 2.9 Blender Settings.
But opposed to Windows it does not copy any file anywhere !

That is why I tried to copy the Windows Connector over to Mac, as AFAIK
it also seemed to contain some Mac Files.
Blender will then also find the Plugin under Scenes category, but can’t be
activated on Mac as there is still a *.json (?) or similar missing, which only
exists for Windows.

Therefore I searched for any “Speckles” on my whole Mac SSD and found
the hidden Config of Speckle Manager and also found Folders that looked
like the AddOn. So I copied these over into Blender Settings.
I think either the py… or Modules Folder exists in two versions, one for Intel
Mac and another for ARM Mac, according the name suffix.
As I learned, the suffixes have to be deleted to get the same Folder Name
on Mac as in Windows …

But good that Connector finally works on Blender 3.4 for now.

I thought I finally get a second supported App soon, to collaborate with Blender

If only Unreal wouldn’t be such a giant monster of a Software.
Hope Epic Manages soon to also supports Speckle for Twinmotion

hmmh, was sure bricscad would announce something when they
teasered something about collaboration and cloud.
Did not happen, yes.

But are you sure it was about Speckle and Bricscad,
or more about Qonic ?

Hey @zoomer, if you want to have a go, a simple POC re speckle bricscad is here: 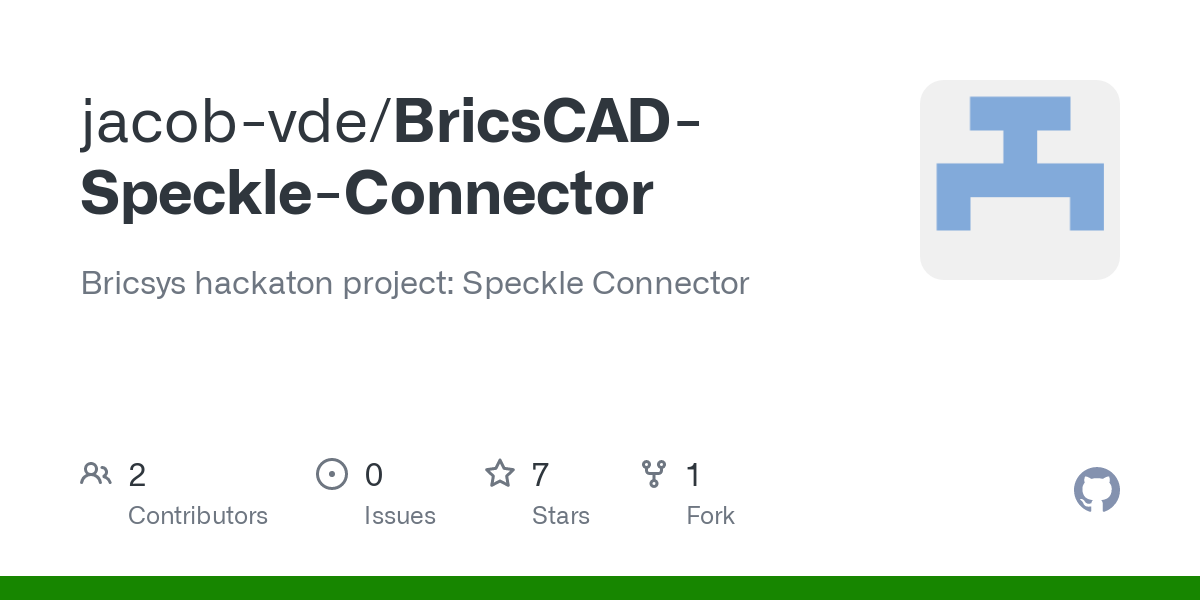 Re qonic, it’s the setup of the bricscad OG founder, so i wouldn’t be suprised