Hey guys, loaded up a big model on both Safari and Chrome and it’s crashing. Video attached. Opens on laptop (Chrome), still crashes on mobile after cache clear - although, I do have iOS Developer Beta which may be a spanner in the works.

Thanks for flagging this up!

It seems to work okay on my android (pixel 5/chrome).

It also worked okay on an ancient hand-me-down ipad pro (safari) that is lying around the house. 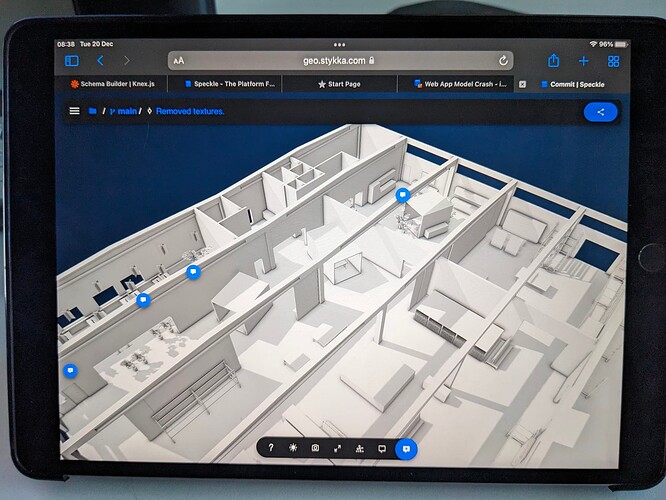 AFAIK, on IOS, all browsers still use Safari in the background, so the only thing that comes to mind is device resources.

One thing you could try is meshing the whole model up and sending just those out - it will reduce memory consumption if the Brep information is not loaded (and needed).

Hey Dimitrie, thanks for spending some time on this one. And no worries on flagging it - quite the opposite - ping me a DM if I start spamming the forum over the coming few months

I’m starting to suspect iOS Dev Beta may be the culprit here. I’ll try on another phone. Not exactly the biggest or most complex model in any case - but it was compared to the very small streams that did open on the problematic phone.

Maybe something is changing in Safari, although I can’t see anything obvious in this subset of the release notes for their 16.3:

Just to close the loop on this I’ll try test on another device and get back to you.