I noticed there were some changes made to the Speckle V2 login page some time over the last 3-5 weeks. And the authentication process for an Excel add-in that I’ve built is no longer working.

The Excel add-in is built as a javascript SPA, similar to the official speckle excel add-in, and I basically copied the auth pattern that was used there.

Since these recent changes, when I open the pop-up/dialog window (which loads the speckle login page in an iframe), it loads the initial page, but after selecting the server and hitting the confirmation button, I end up getting this page: 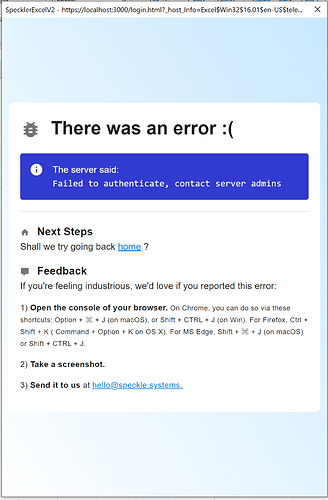 It seems like maybe it doesn’t wanna load the /authn/verify/${SPECKLE_APP_ID}/${CHALLENGE} page from an iframe. When I emulate the same thing in the browser it seems to work as expected.

Does anyone know of any updates that might be affecting this?

Any ideas or suggestions would be appreciated as I really need to get this app working again ASAP.

I’m not aware of any relevant changes to how authentication works in the backend in the last month. I don’t think there should be any problems loading things in an iFrame either, our security policies are pretty permissive.

You mention that opening the URL in the browser works - what are you using to open the URL in your app? Is it some kind of webview? Could it be that it’s running an old browser version that can’t render the auth/login pages properly and throw JavaScript errors?

Could you record a video of you doing the authentication flow on your end so that we can see how exactly is the process failing and how the pages are opened?
If you’re running the speckle server instance locally, maybe you see some kind of error being outputted there?

I can also confirm that the official excel plugin did not get changes in the auth logic since almost forever, so it might be something to do with your server fork Tom?

Thanks both for the quick replies.

I think the changes I was seeing to were probably only on Arup’s forked version.

Just now I installed the official speckle excel add-in to test that, and when I entered the Arup server and hit the button, it strangely brought up a pop-up that showed part of the auth process for my app: 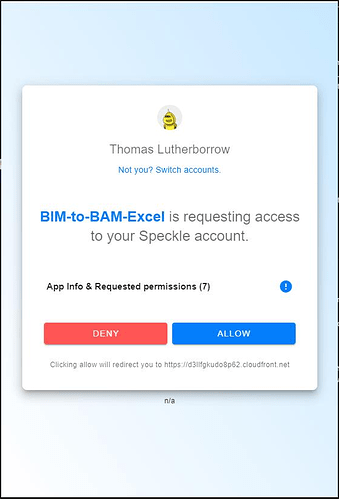 I guess maybe there’s some weird caching going on somewhere. I tried signing out, reloading the official speckle add-in and reconnecting to the Arup server but I was never able to reproduce this behaviour again since that one initial time.

Immediately after, I tried opening my add-in, and it was magically back to normal, working just as before.

I’m baffled, but also too tired to care and just happy that it seems to be working for now