Is there a way we can deploy updates to speckle manager for devices using powershell or command line? Or is there a way standard windows users can update the different speckle apps/plugins themselves?

We have also been experimenting with alternative installation flows to support company-wide deployment, please check out this doc and let me know if it answers your questions: Notion – The all-in-one workspace for your notes, tasks, wikis, and databases.

A new tool that blends your everyday work apps into one. It's the all-in-one workspace for you and your team

This is great. Can we have one for Rhino?

Yes! Will add it to our todos

Hey @vwb we’ve added support for system-wide installs to Rhino and Gh too!
Would you be so kind to test the pre-release installer for me?

You can get version 2.5.4-systemwide from:

Some docs in here:

This is very cool. I’m out until Monday, and will test by then. Thank you very much Matteo!

No problem, just a quick update, we found out that Grasshopper by default only loads plugins from the local app data folder, we’re currently looking for possible workarounds!

Just tested the Rhino one and it works, thank you @teocomi.

No problem, just a quick update, we found out that Grasshopper by default only loads plugins from the local app data folder, we’re currently looking for possible workarounds!

Regarding this, the pattern I’ve seen for other plugins is that they bundle their GH and Rhino plugins together. When you install a Rhino plugin, Grasshopper also understand that the plugin folder might also contain .gha libraries and automatically includes on its “loading paths”.

Even the SpeckleRhino is included on the path, as you can see in on _GrasshopperDeveloperSettings. 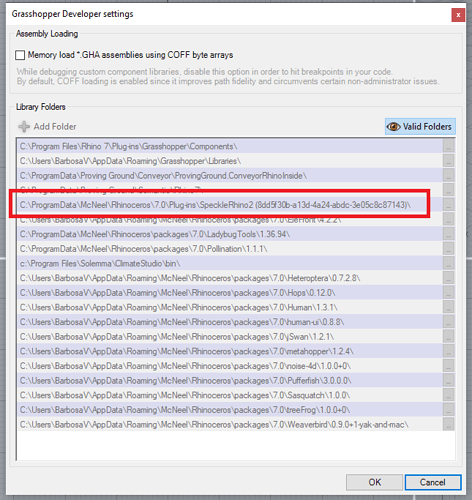 I don’t think bundling is the way to go with Speckle, since there’s a clear cut between the Rhino/Grasshopper plugin development, distribution etc.

But, if instead of copying things to folders, you wrap SpeckleGrasshopper as a Rhino plugin, you could install it anywhere I guess. That’s my workaround suggestion

I think we’d be up to combining the two connectors into one, this is actually how it was in v1!
We’ll do some more investigations internally and will let you know!