We are using 2 Levels based families in our projects and we found that when we send to speckle the information of the top level is not present in the database. see the image below comparing standard column data to the 2 levels family: 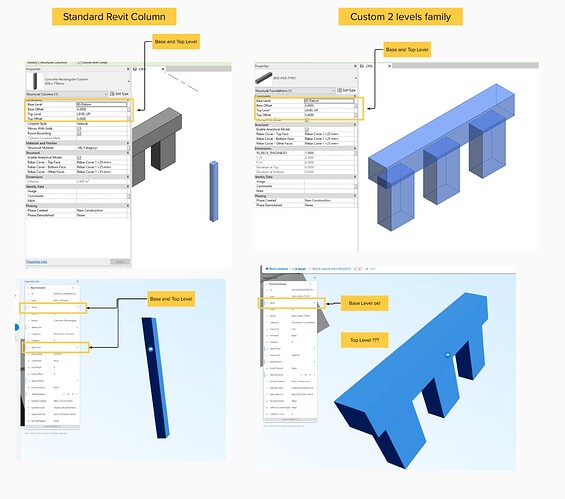 Is this something fixable?

The issue here is that your custom family isn’t a column, it is a structural foundation. The reason that this matters is because all columns are (or in rare cases are forces to be) twoLevelBased. However we can’t say the same thing about structural foundations; think for example about spread footings which are usually defined by a single level and a thickness.

Currently the way the top level is captured is via the Revit parameters of the object. There is likely a property under the “parameters” property called STRUCTURAL_ELEVATION_AT_TOP.

However, this isn’t the way it has to be, it’s just the current system that we have in place. I think you bring up a good point that if my Revit family is defined by two levels, I would expect to have both levels as properties of the object.

Do you think the STRUCTURAL_ELEVATION_AT_TOP parameter would fit or use case or would your life be easier if the object had the topLevel property?

In that example, I’m using a structural foundation, but in some cases, we are using other categories (“Abutments”, “Piers”…) not sure all family categories have a “STRUCTURAL_ELEVATION_AT_TOP” parameter.

Another point, in some cases the stream fails to receive when 2 different levels are selected for the base and top level. as a workaround I’m putting to the same level base and top and putting an offset for the top.

Okay thank you for bringing this issue to our attention. I just made a fix to our code base to check if a family instance is two level based and add the top level info. But this functionality probably won’t be availible until our next release, 2.12, which will happen some time in early to mid february.

In the meantime I hope the STRUCTURAL_ELEVATION_AT_TOP parameter can fit your use case.

thanks for the update! I will wait for the 2.12 version