Questions/remarks on structural objects and their GH implementation

Thanks for the meetup. As mentioned, here is a mix of comments or questions that I have been writing down while I’ve been using the structural object model in combination with SAF. It was a bit too much (and perhaps too detailed) for the meetup.

Some ideas/questions specific for Grasshopper (as this is a powerful way to define parametric structural models):

That’s all for the moment. Happy to hear your thoughts and discuss!

Goede morgen Kelvin, I’ll answer on the parts that i’m credible on! I’ll leave the rest to y’all structural folks.

Are there any plans for or thoughts about adding (symbolic) visualisation of structural model objects in the online 3D viewer or Grasshopper (for supports, members, loads, joints, results, cross sections…)?

I remember we did discuss this previously, but only for visualising results (e.g., moment diagrams). This can definitively happen though, albeit there’s going to be quite some artistry and threejs-magicness involved. Some points:

If for a specific app there are one or two properties missing in a Speckle object which are not always needed (e.g. the fillet radius of a tube section, that needs to be defined in SAF), is it better to add them dynamically (in the member dictionary of the base object) or to make a new app-specific derived class in which these properties are added (better defined, but might lead to a lot of classes in the end)?

My gut feeling here is to go, at first, with adding them as dynamic props, and being defensive on the conversion toX side (ie, checking if the prop exists and isn’t null before actually using it). We can always cement those props later in actual classes. (why i’m thinking like this: it’s very easy to add props to a class, but it’s very difficult to remove them afterwards)

It would be useful to have methods for common geometry operations to deal with local coordinate systems of elements (also see here): vector length, cross/dot product, norm, line direction, …

Why not? I think @Jedd needed some too. I would, though, include them in a separate project, outside of the Object model. B

Is it possible to add a custom string representation to Speckle objects? Or default to “Class name + Name value”. The current one is often not very meaningful for people setting up these models:

Oh yeah, i kinda wanted that too for some time. IIRC, the default toString() of a base object returns it’s fully qualified type (by speckle deserialisation standards), but we’re not relying on the toString() method itself. Two options:

also for the ExpandSpeckleObject component, would it be possible to match the order of the most common schema inputs in the output parameters to avoid the spaghetti below?

Over to @Reynold_Chan for the structural parts, and @AlanRynne if you have time, feel free to chime in on the grasshopper parts!

Thanks @dimitrie for your reply!

This can definitively happen though, albeit there’s going to be quite some artistry and threejs-magicness involved. Some points:

Great to hear! Karamba3D is a great source of inspiration here.

Why not? I think @Jedd needed some too. I would, though, include them in a separate project, outside of the Object model. B

So it’s not on your own backlog yet? I guess it’s best to integrate an existing library, like

Perhaps we can tag the properties that we want to see appearing in the string representation? So we have a single ToString method in Base of which the contents can be manipulated per object.

We could (again using a tag) add an order to the object fields: c# - Get properties in order of declaration using reflection - Stack Overflow. Question remains whether this is a good idea…

@Reynold_Chan , @jenessa.man , @AlanRynne, would be happy to hear your feedback. I’ll make sure to post these kinds of lists BEFORE the meetup next time so it can be discussed there

Apologies for the late response.

baseLine property of Element1D should accept a general ICurve instead of a Line; curved or multisegmented beams are imaginable.

another example of duplicate data in properties is baseLine, end1Node, end2Node and topology. Better to for example scratch the end nodes and only use topology (and rename this property to “nodes”)? It will certainly simplify the amount of cases to be considered by converters.

You will probably only use Element1D end1offset, as opposed to property1D offset Y/Z, those offsets are meant more for the property offset themselves for the sections.

So this is cause some program uses plane as well for definition, but I do agree that Node is more common. Need some more thought about this one.

I find axis confusing as a name, something like CoordinateSystem would more clearly represent what it is. Perhaps this is just me?

It’s alright ? just a personal preference here I think. Axis makes sense to me because you can have polar .

it is currently defined by a plane, not 3 vectors; when set for a 1D element, should this be the plane normal to the element in which the profile is drawn (feels most intuitive; the main axis of a plane tends to be its normal) or should the axes correspond to the local axis convention of a beam (which makes most sense; X along the length of the element, Z points up and Y points right)?

Yes this is because axis can be non Cartesian in nature. Hence why we would use the orientation node/angle more. I think the logic behind the whole axis thing is due to non-cartesian possibilities.

Currently seem very specific for GSA, and it is not always to find a one-on-one mapping with SAF:

Most of these have 1-1 mappings, but they are always open to more review. I agree that it might be useful to have an Other for all enums.

Thanks for your feedback!

Regarding the example use of some properties/objects, are you aware of other community initiatives making use of the Structural objects for new connectors/converters?

In case multiple properties contain the same info but in a different format, would it be better to make one of the properties a function of the other? This to remove duplicate data, which risks to be inconsistent and complicates methods. For example, as a 1D member’s topology also comprising the startNode and endNode, just store those into the topology and return the first item of the topology list when requesting the startNode, and the last when requesting the endNode.

I’ve been hesitant toward defining a general ICurve mainly because I think it’s a simplicity factor and mainly cause I don’t recall the last time I saw a curved line being modelled inside FEM programs.

Indeed, it’s not common, but in SCIA for example you can model curved members (whether you should is a different question). If you want to create an object model that can serve any software, I would think that its basis should be as permissive as possible. Afterwards limiting the geometry to lines for some converters is just a simple line of code. 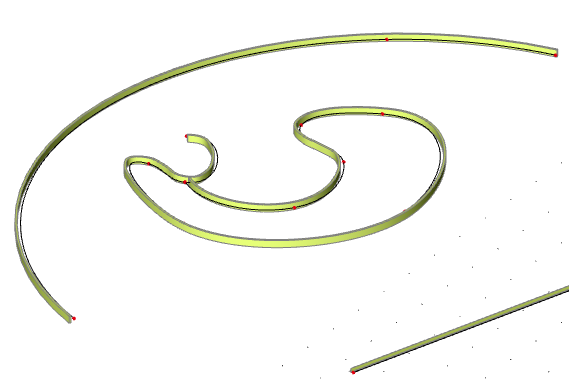