I uploaded a relatively simple model for testing. Consisting of 770 Objects from grasshopper, mostly just rectangular BREPS. It sent relatively quickly taking only a minute.

But when I go to hit the receive by testing the PowerBI connector it took upwards of 3 hours just to get the stream, and then 2 more to get it into power Query, and every step I try to apply takes almost half an hour…

Same thing when I try to access the stream via simple transport in Python. taking upwards of half an hour. Somehow it’s saying there’s a total Children Count of 5944 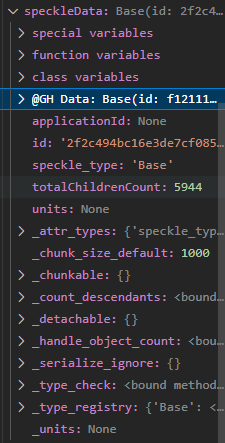 This doesn’t seem normal. How would I go about debugging this??

Our PowerBI connector is painfully slow atm because it fetches objects one by one. We are aware of this and @AlanRynne is currently working on a feature to make this process faster.

I don’t know much about Python tho. I’ll let someone else answer on that.