Been stuck on an issue with using kits with the GH connector that I could use some help with. Each time I drop a component down that utilizes SelectKitAsyncComponentBase it immediately drops an error message with “no default kit on this machine”, which is crazy cakes cause on my machine I have kits located in the default folder location.

I’ve done some debugging to see what’s going on, but it hasn’t lead to much discovery.

I was wondering if the issue could have come from the way I was referencing ISpeckleKit, either with the nugget Speckle.Core vs a direct project reference. I put together two new test projects, one that uses the nugget ref and the other with the csproj. Both work with the test above, but had no impact on the grasshopper connector.

So, this is where I am, nice and stuck in the *.dll hell

. Any help and/or general positivity is much appreciated.

Oh! As a side note, one thing I did find during the debug process was a possible bug when calling KitManager.Kits. If a kit is installed on a machine but doesn’t implement the getter for Types it will return a null item that is then trying to be pushed into a collection with ToList().

hey @haitheredavid, sadly I know this issue, it been popping up at random times.

To be honest I’m not really sure why this happens. Usually a full reinstall of the connector does the trick to get the kit manager to work again 🥲

Another thought, could you have mismatched installed versions of Rhino and Grasshopper connectors? Could you try with just the Gh connector installed?

The resason being that the Rhino SpeckleCore2.dll gets loaded before Grasshopper, so any mismatch will cause trouble.

@AlanRynne thanks for the response! Happy to have your help

I have tried re-installing the connector from the manager a couple of times without any luck, I’ll give it another go this morning and see if anything changes.

Another thought, could you have mismatched installed versions of Rhino and Grasshopper connectors? Could you try with just the Gh connector installed?

Seems like this did the trick with that error!

However, a new issue has come up

It looks like none of the additional kits are being loaded into the converter now.

I step through some of the lines and found that the KitManager is trying to cast each local kit to ISpeckleKit and those casts are returning null for everything besides the default object kit. Could this be caused by mismatched versions of the SpeckleCore2.dll ?

edit: I misspoke about the casting error, I no longer was receiving it once I removed the rhino connector and built the grasshopper connector

I guess the other Kits are referencing a different version of SpeckleCore and are probably missing to implement some interfaces, hence the nulls…
Try using the latest nuget? We make new ones with each connector release.

@teocomi I misspoke in that last comment, after removing the rhino connector and building grasshopper connector I was no longer receiving that error during that cast. I stepped through the lines again today and notice kits was able to cast and store my other ISpeckleKits, I’ll edit that comment!

I did discover the issue thou

The dropdown menu that gets populated with the available kits + converters is hard coded to load kits for rhino6, and I’m currently developing on rhino7. I changed that parameter to Applications.Rhino7 and everything started working 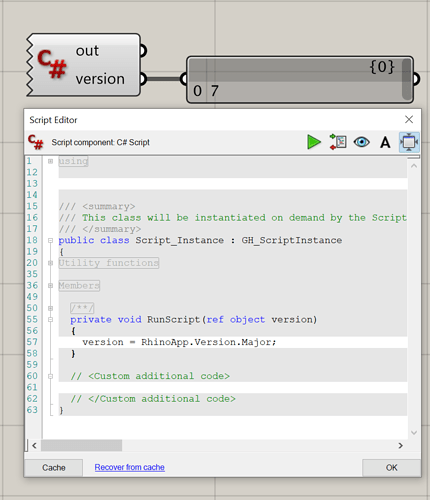 Ah! Nice find, and sorry for causing you headaches!
Will, add a ticket and fix it asap

For what it’s worth this lil getter seems to be doing the trick within the SelectKitAsyncComponentBase parent.

Hey @haitheredavid, sorry for the headaches

Just got back from my vacation.

So the reason the kits are hardcoded to load only Rhino6 is because our Grasshopper build depends directly on the Rhino6 converter (instead of building 2 different .gha for 6 and 7 independently).

I haven’t checked the GetRhinoVersion getter yet, but off the top of my head, this may cause problems if a user only installs the GH connector, as they’ll only get the Converter.Rhino6.dll, and hence will have no default kit

Anyway, we’ve had talks about splitting the Grasshopper build for each Rhino version (just like our Rhino and Revit connectors work), which should also fix this problem indirectly.

Meanwhile, if this fix has no downsides… I’ll be happy to add it!

Thanks for this information, that makes a bit more sense of why it’s hardcoded to Rhino6. I think the lil’ getter I wrote would fail since it would require the namespace of Rhino. Unless there is other people hitting the same issue, I think this lil’ getter can stay put in my fork rather then cause headaches in the main one.

Out of curiosity, is the reason for directly relying on the Rhino6 converter and not a GH converter mainly to reduce repeated code since most grasshopper objects are mutable to rhino objects?

Out of curiosity, is the reason for directly relying on the Rhino6 converter and not a GH converter mainly to reduce repeated code since most grasshopper objects are mutable to rhino objects?

Exactly! But we might consider breaking things down a bit more using shared projects (like the Revit one).

In RHDHV we’re planning on starting some of the coming projects on Speckle 2 and I was doing some initial testing to get familiar with all new exciting features. However, I came across the similar issue as @haitheredavid mentioned in his first post: the “No default kit found on this machine” error.

Only installing the GH connector did the trick for me, but I would like to get the Rhino connector working as well. Is there already a fix available for this issue?

I got the latest SpeckleManager (v2.1.21) and I’m trying to get the v2.3.0 versions of the GH and Rhino connectors working. I also got the latest Rhino 6 & 7 versions installed.

Hey Gerran, welcome to our community!

Just to be sure I understand correctly:

Is it correct or am I missing something?

I’m sorry if I wasn’t clear enough, so here a second try:

And thx for the quick reply!

I tried to reproduce you error in my machine with no luck. Could you also try installing the latest beta version of both connectors and see if the issue persists?

You can activate the beta versions of connectors under the settings panel of the Speckle Manager, then reload the app and you should see the available beta update notification.

Let us know how it goes

and thanks for reaching out!

Unfortunately that still gives the same issues. I’ll have a look around in the company as well to see if there’s anyone experiencing similar issues.

Thanks for getting back to us! I’ll have a conversation with the team to see what’s going on here.

Meanwhile, could you check a couple of things for us?

Go to %appdata%/speckle/kits/objects and check the contents? It should look like this (in my case, i have Autocad, Dynamo, Revit and Rhino/Grasshopper installed from manager) 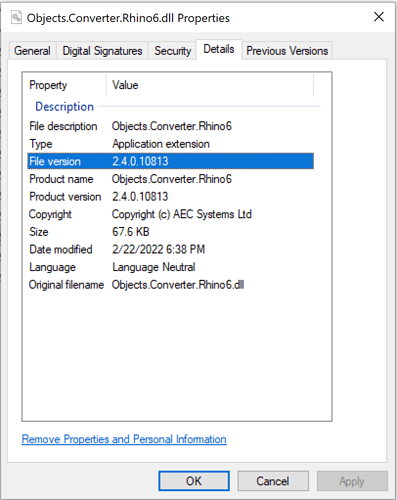 A couple of additional thoughts @GerranLankhorst:

If the problem persists let us know and we can think of additional solutions!

@GerranLankhorst Are you using rhino 6 & 7 and getting the same issue for both?

Thanks for all the replies and I’m sorry I didn’t reply yet.

I decided to try to reinstall the connectors one more time when I saw today that there were new updates available. And you know what? Now it works

! I’m not sure what the issue was since I didn’t do anything differently.

Anyway, I haven’t heard from anyone else experiencing a similar issue. So let’s assume that the issue has been solved. Thanks!

Thanks for getting back to us! I’m glad the update “fixed” the issue for you, although we’re still quite unsure why this happens in the first place.

We’ve had reports of this every now and then, so if you ever bump into it again we’d be happy to schedule a call and poke at it if you’re willing.