The issue is that manually entering 45 data key names into the “Create Custom User Data” inputs would be a drag. So how can we automate this? Does this functionality already exist?

I’ll explore hacking CUD to achieve #2, but C# is not my strength…

Hm, interesting shout. I had a teeny tiny look at user strings - pardon if i’m naming things wrong, it’s been a while - which i believe elefront uses; was even considering having it as the de facto user data plugin for speckle, but i needed (wanted) to support nesting props and such.

Some example files/objects with user strings would help in deciding this, but i can see for example, having either a convert strings to user dictionary component; or alternatively, a component with two inputs, “keys” and “properties” where for each key you set a property - would this help?

I’ve been scripting a variant of #2. Making a component out of it shouldn’t be too hard! 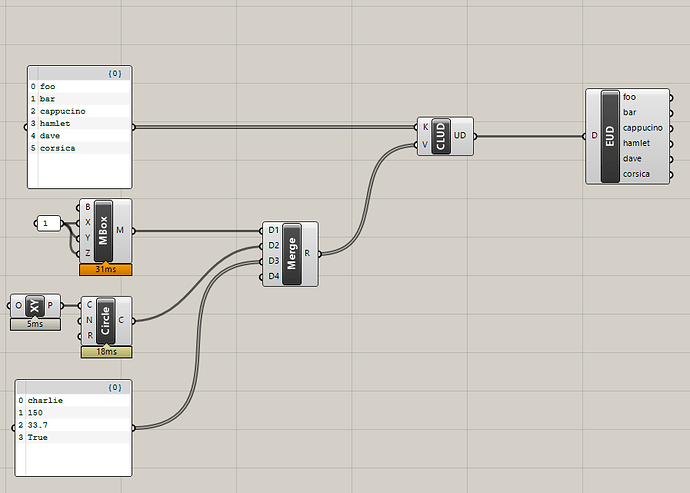 Nice, that definitely looks like a very effective implantation. Does it allow nesting as well?

The idea of a convert strings to user dictionary component seems valuable in the absince of the above. Would the String look like this?

I’m sure @TomSvilans is gonna share his CLUD component, or push it to the main repo

Nesting can be done afterwards imho…

Maybe some info regarding how custom user data is implemented: it uses the ArchivableDictionary that every GometryBase object can have. There’s a conversion (that actually tom just fixed today

) that takes that dict and makes it a proper Dictionary<string,object>. There’s really very little json involved in SpeckleCore until really at the end, when things get serialised for sending to server…

@nico if you’re impatient, you can pull my fork (wheeyyy) from GitHub - tsvilans/SpeckleRhino: Rhino 5 & 6 + Grasshopper Speckle Clients and build it to get the CLUD component.