Hi,
I’m playing around with Speckle v2 and I think it would benefit from possibility to group somehow commits from different streams in a project together i.e. to bind together state of a project as issued to the client.

Note that this could not be done simply by “date-of-issue vs most-recent-date-of-commit” as different streams would end at different time for a stage and some disciplines would like to continue their work for Riba4 with some extra requirements from the client, while others are still working on Riba3 (in “old reality” without those extra requirements).
See my crude sketch describing the idea: 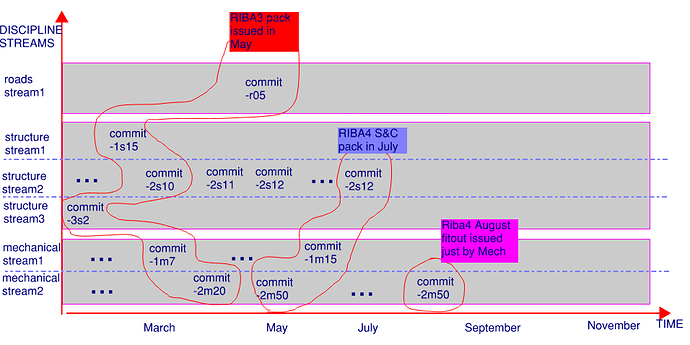 Giving it a though I think the most flexible approach to this would be possibility to “tag” commits, with interface to be able to “group tag” a number of commits from different streams in one go.
This could solve not only the problem I described above but could be used for some other cases which others might have. Commits could have multiple tags assigned to it for different purposes/filtering.

Wow, thanks for the detailed explanation. This feature would be pretty neat if you ask me

We’ve definitely talked about adding project/team management features in the near future, it’s currently in the roadmap. I’m sure @dimitrie or @teocomi could elaborate further on this anyway

Yes absolutely, and together with projects/teams we’ve also discussed adding something like tags/releases.

Would love to brainstorm this together at an upcoming community standup

Thanks for the feedback!