What’s the best way to list object ids currently in a stream? Or, more specifically, the object ids expected by the speckle viewer’s loadObject() method?

From a dotnet server, I’ve managed to create an object with some displayValue geometry, commit it to a stream, and then view it on my locally running server’s frontend. In C#, the class is defined as:

After a commit with Helpers.Send(), if I use the Helpers.Receive("{streamDomain}/streams/{streamId}/branches/main") method, I get the following:

These results are more or less expected. Please do not judge my line quality. He’s doing his best.

The problem I’m facing is, if I use either one of those listed ids (the top-level object or its displayValue) with the javascript viewer.loadObject(${streamDomain}/streams/${streamId}/objects/${objectId}) method, it says it can’t find an object with that id. The id changes if the object changes, which is understandable, but I can’t get any ids from Helpers.Receive() to work.

If I visit the server frontend, the data view will present me with almost the same values as Helpers.Receive(): 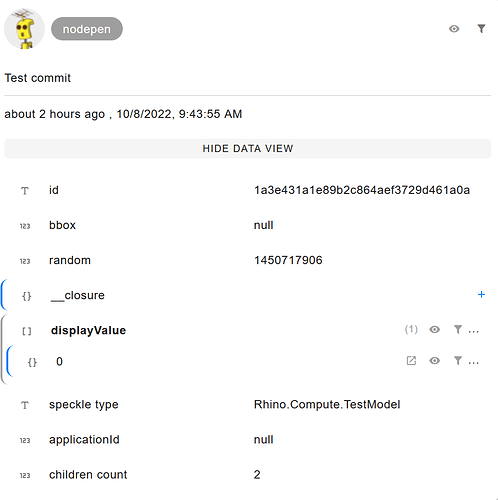 Importantly, the id from this latest commit is different from the value in Helpers.Receive(). If I use this id in viewer.loadObject(), everything works as expected.

What I’d like to do is commit a change and then have a way to (re)load that model after the change has completed. Is there a way to programmatically find the same id being presented to me in the viewer?

Away from keyboard atm, so just a sort reply. I’d suggest looking at the object loader library:

And how it’s used in the frontend, excel connector etc…

UPDATE: realized you asked about C#, so scrap the above!

Still useful! Hadn’t yet encountered that, will take a look. If the answer right now is “ask from javascript” that’s totally fine too.

Stepping through how the frontend does it now. Seems to be something about asking for a commit directly. I think I just might have the wrong mental model of what’s “in” a stream vs “in” a commit.

Object loader was the perfect reference, pointed me to the right part of the viewer code.

In order to get the id shown in the frontend and expected by viewer.loadObject(), I can use the following snippet:

Also popped up in the docs here under “Advanced Receiving”.

The objectId there is still different from the id fields in the result of Helpers.Receive(). But it looks like I just got a bit twisted over which-object-and-when. Helpers and viewer.loadObject() use this “root” id and I understand now it’s the one I should be after. It looks like the object loader would help with anything I want to do once I have that information (or I could use the viewer APIs, since the id is enough to load it there).

Thanks for the help @teocomi !