I am relatively new to Speckle. I am trying to test Rhino (7) - AutoCAD (2022) data exchange. Main aim is to get a CAD drawing into Rhino for further operations in gh and if possible send back to CAD post gh operations. I tried to stream some curves and lines. It works fine as far as geometry is concerned but I have a few queries.

Firstly, the CAD line properties are important for me (colour, thickness, style, layer, etc.). When I receive back in rhino I only get simple white lines. The colour, thickness, line style are all missing. Is that expected?
AutoCAD -

I tried to create some lines in Rhino and put them on different layers with layer colors and line style. Tried to receive them in AutoCAD but faced the same issue. Only layer name is imported that too with an extended name. 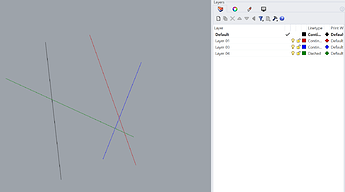 Can someone please guide me how I can transfer complete line data, if it is possible. I really hope I am missing something. Any tutorials for something similar would be greatly appreciated. Is grasshopper having any special components to do that?

Secondly, if I import the lines in rhino (created in autocad), rotate them or scale them in rhino and send them back to cad, it will create a new copy of the lines. I was hoping that it would replace the existing geometry in cad. Similarly if I perform operations on rhino lines received in cad and send them back to rhino, it would create a new copy instead of replacing the old lines. Is it possible to update existing geometry? Could be as simple as replacing all the geometry in the given layer.

Thank you very much.

I have been browsing for a solution. Bumped into the list of supported elements, seems like the line properties are not yet supported?
https://speckle.guide/user/support-tables.html

I cannot code much unfortunately, not at least what is required to create a new connector for the desired functionality. Any comments or guidance is much appreciated.

Hello @saket, welcome to the community!

We are working on expanding our display and materials support for conversions across our connectors, but particularly for AutoCAD it does sound like a pretty key feature to have! I’ll file an issue to look into adding (at minimum) color support between AutoCAD and Rhino curve conversions and keep you updated on the progress.

Regarding the updating geometry feature, this is another good shout about desired functionality and I’m happy you brought that up! However in the two application workflow you are describing, new Rhino curves are actually being created when you send them from AutoCAD and there is no quick and easy way to link the Rhino-native curve to the AutoCAD-native curve at the moment. It’s something we’ll keep in mind and see if a good solution pops up in the future

Thanks @clrkng for the explanations. Colour, line thickness and line style would be good to have. Those are like the building blocks of any CAD drawing. Next would be hatches.

I can understand that to link native rhino curve to autocad curve is very complex, unless we have some kind of unique id (like revit) associated with each element and the import cross-checks on any new update for all elements.

@saket I’m currently working on this issue, if you have a nice AutoCAD model with some colors & styles to test on that would be super helpful! The main thing I’d like to test is differentiating between colors and styles determined by layer vs by object, on both sending and receiving - would be great to get your feedback to see if the results are what you’re looking for