Uploading from Rhino LC, S, abbreviations, and any log file or console

Hi, it is me annoying you again,

What is exactly LC and S in the following widow?
For some objects the LC and S are going very high and then it is stuck and not doing anything.
What is happening behind the curtain ? Is there a console that I can see what is executed ? How do you convert meshes ? It seems that sometime the algorithm falls into endless loops.
The CPU and GPU are kept low at conversion, perhaps parallel threading could speed up things ? 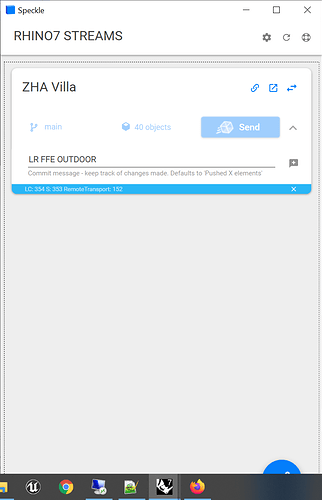 The “LC” stands for “Local Cache” and the “S” for “Serialisation”.

Not sure what could be going on there, but I’d be happy to check it out if you are able to share the file (or the failing parts at least) with us.

I’m not the best person to explain what’s going on during serialization, etc… maybe @cristi can jump in here too! But as far as I’m aware we are doing parallel threading to speed thing up during sending and serialization.

Which version of speckle are you using in Rhino?

For the meshes, the conversion is actually quite simple, we just convert all vertices and faces into speckle form and serialize them as flat lists of numbers (this is for performance reasons).