newly received geometry is instead added to a new Layer.

Is this nested layer structure intentional or I have done something wrong? 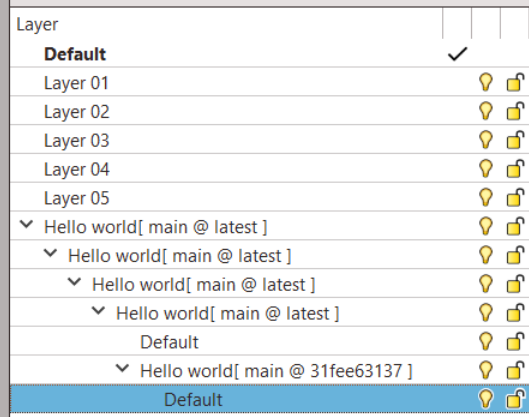 Let me just start by saying this is not intentional. In theory (@clrkng can correct me if I’m wrong), the layers parent layer (i.e. the one holding everything else that’s suffixed [ branch @ commit ] should always be created at top-level.

Thanks for reporting this

I’ve never seen this before but I have managed to partially reproduce the issue, but just got to one level of incorrect nesting. Receiving a commit did land in the right place (I see your’s did not) 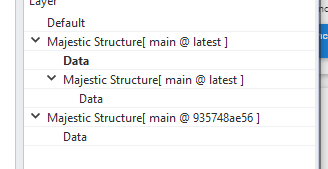 I’ll open a corresponding issue in GitHub so we can properly track this, but meanwhile, could you share the steps you took so we can fully reproduce this behaviour?

I was just playing around, just the usual process of receiving, changing, sending, receiving from somewhere else with minimal geometry. I was using both old and new UI, if that has any effect. The issue happens even if I just receive the latest from main in an empty Rhino file. I just added you as an owner to the stream if you want to check it out. Let me know if there’s anything I can help with.

Great thanks! I didn’t test swapping between UI’s but we’ll do some more digging on our side and get back to you when we have an update

I have a vague feeling this might also be related to this issue? Treat this is as an unverified hunch…

Forgot to mention I sent the first geometry in the stream from the Sketchup connector and received it in Rhino. Unfortunately wasn’t paying attention to layers then so not sure if the structure was like above from beginning or not. But then played with sending and an receiving in two Rhino instances on my own machine.

BTW, do you have a github issue link for this so I can follow or add comments to?

A quick update to let you know that this issue should be fixed with the next beta release!

The Rhino connector has also been updated so that the parent layer name will now always use the id of the received commit instead of “latest” if the latest commit is received.