Hi,
can you provide the Graphql command for sending a comment?

Should I make a commit in order to send the comment?
To which element is Comment attached ? Object id?

Nominally, you can comment on Streams, Commits, Objects or other Comments

These are all mandatory fields.

The data object is critical to not breaking the web viewer. There are other fields, the GraphQL docs don’t list them, but make a comment and query it). but I have found that if you do not include the location object, the viewer will become unresponsive as the code is specifically looking for this to render. (I should probably file this as a bug)

resourceId is straightforward, but the resourceType is an enum and not a string, values are: comment, object, commit, stream

I’ve only really had success with objects and commits, and again, only with that minimum data object but that could be me not forming the mutation correctly ???

thanks! I have tried the way below and it seems to work although I get an error as return. 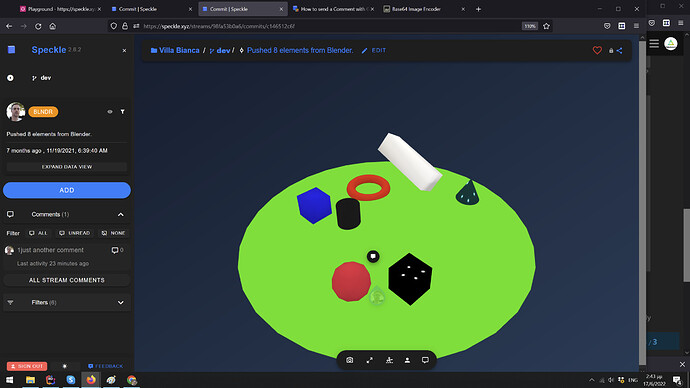 I should have said, I always get that error too. But, I have only had the viewer break if the location was missing.

ok, initially I have omitted the location. This might triggered the issue which I figured much afterwards.

sorry for the breakages around our fairly unformalized comments API, this is def the result of us moving quickly and not being ready to formalize a schema around the comment.data object.